Andon Ryokan and Minowa:
An unconventional ryokan in Tokyo's 'under city' 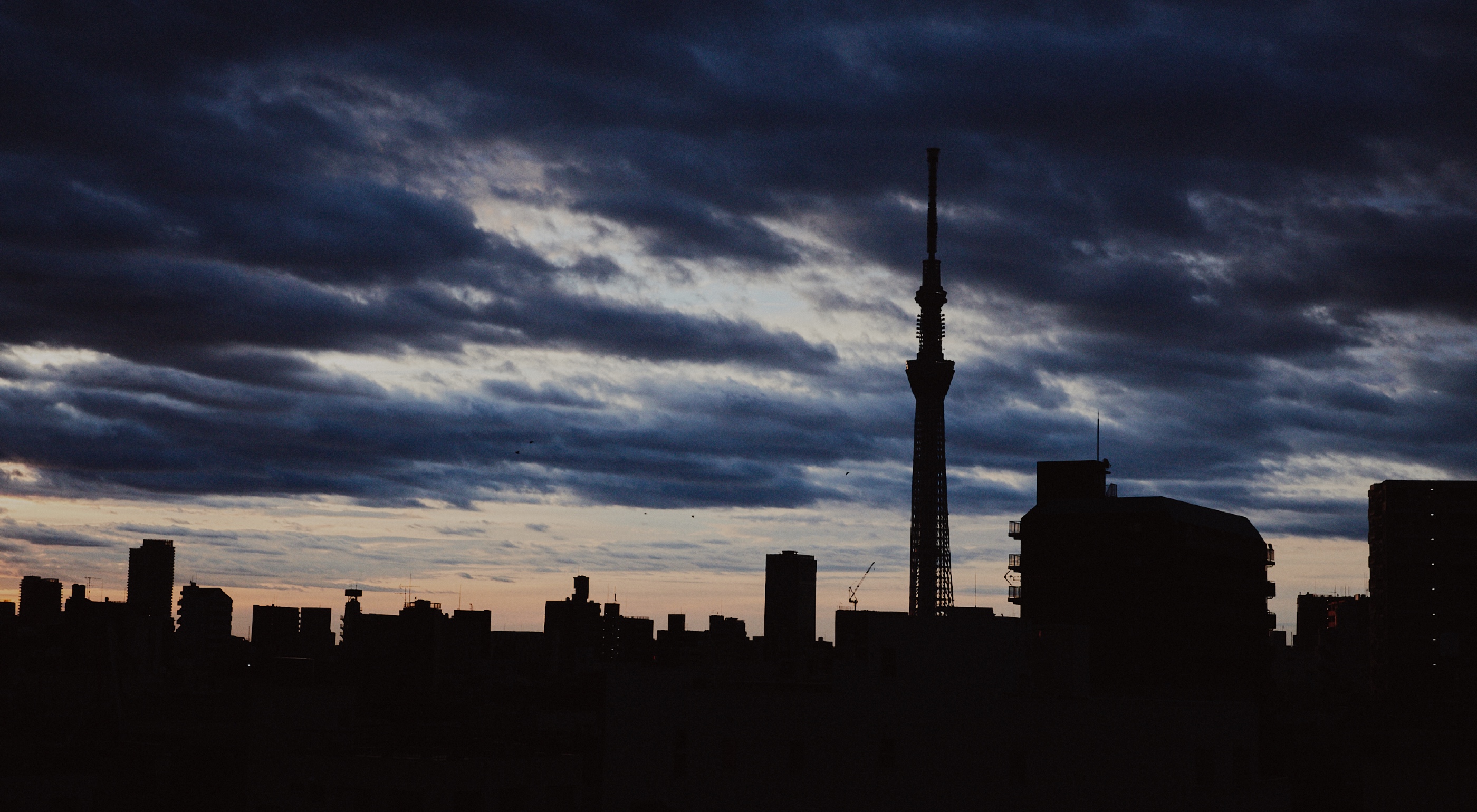 A blend of old and new

Designed by the architect Masayuki Irie, Andon Ryokan’s five-story steel-frame building has a striking turquoise glass façade---not quite what you would expect a typical Japanese ryokan to look like. But then again, Andon Ryokan is not a typical Japanese ryokan. The building was built in 2003 when owner Ms. Toshiko Ishii decided that she wanted to provide comfortable yet affordable lodging to foreign visitors on a budget. The interior is modern and compact, but Ishii-san had a clear concept in mind and throughout the ryokan one can find well-thought-out design elements intended to mimic traditional Japanese interiors. For example, all the rooms have tatami flooring, guests sleep on futons and the muted lighting is reminiscent of traditional Japanese houses. In addition, the reception and lounge have authentic Japanese elements, like a small “koagari” (raised seating area) where guests can enjoy a tea ceremony and throughout the ryokan Japanese antiques are displayed, lovingly collected by Ishii-san. 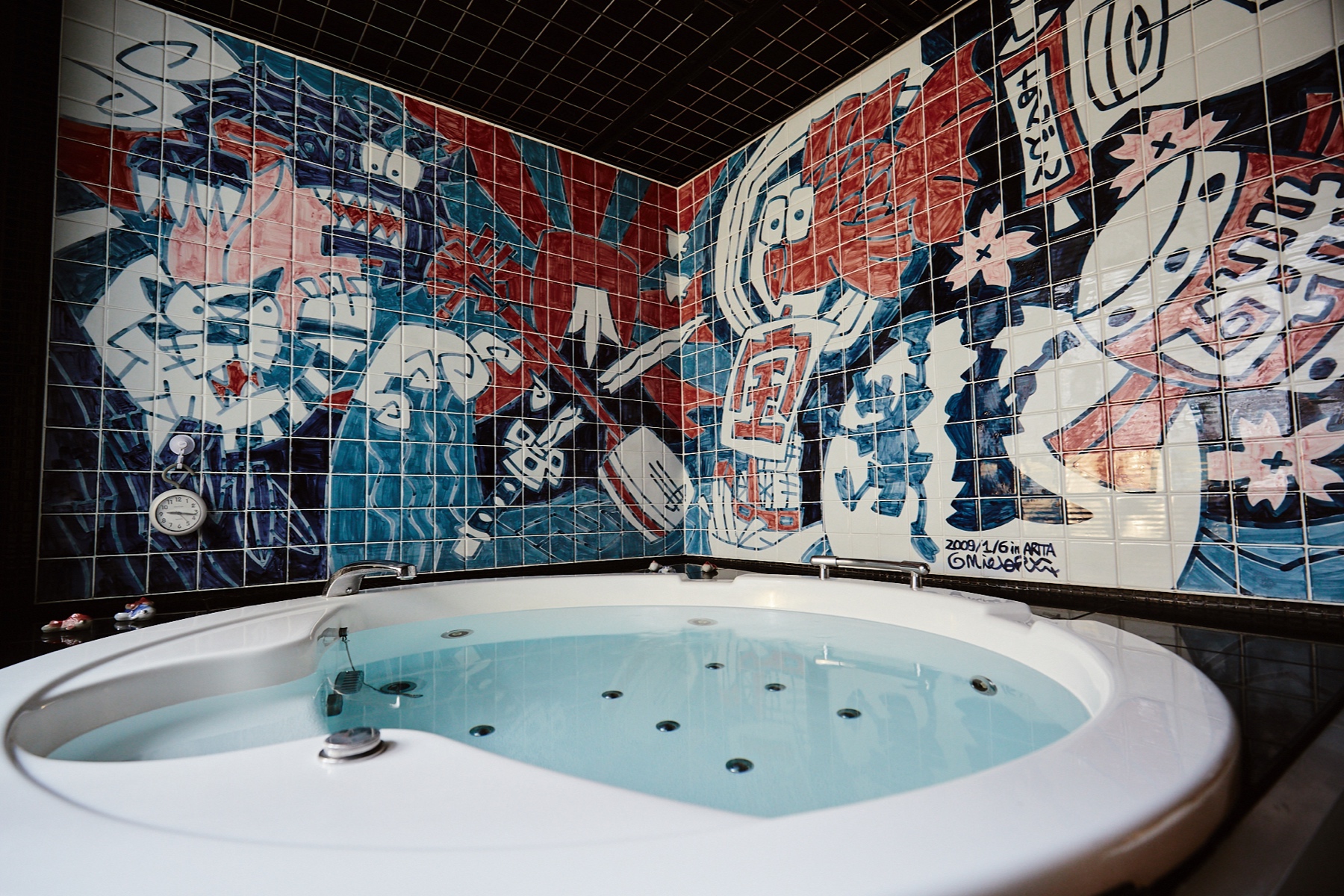 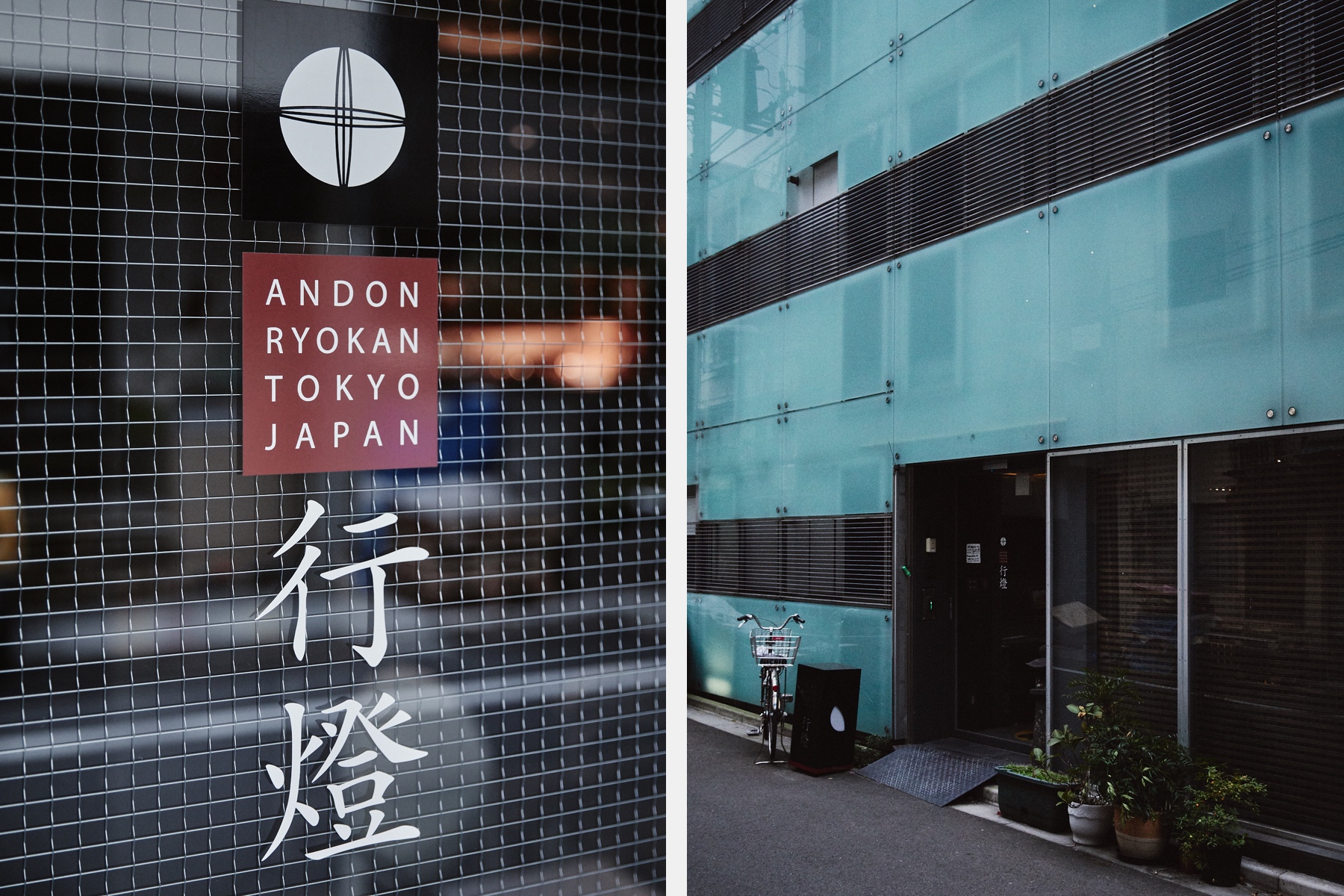 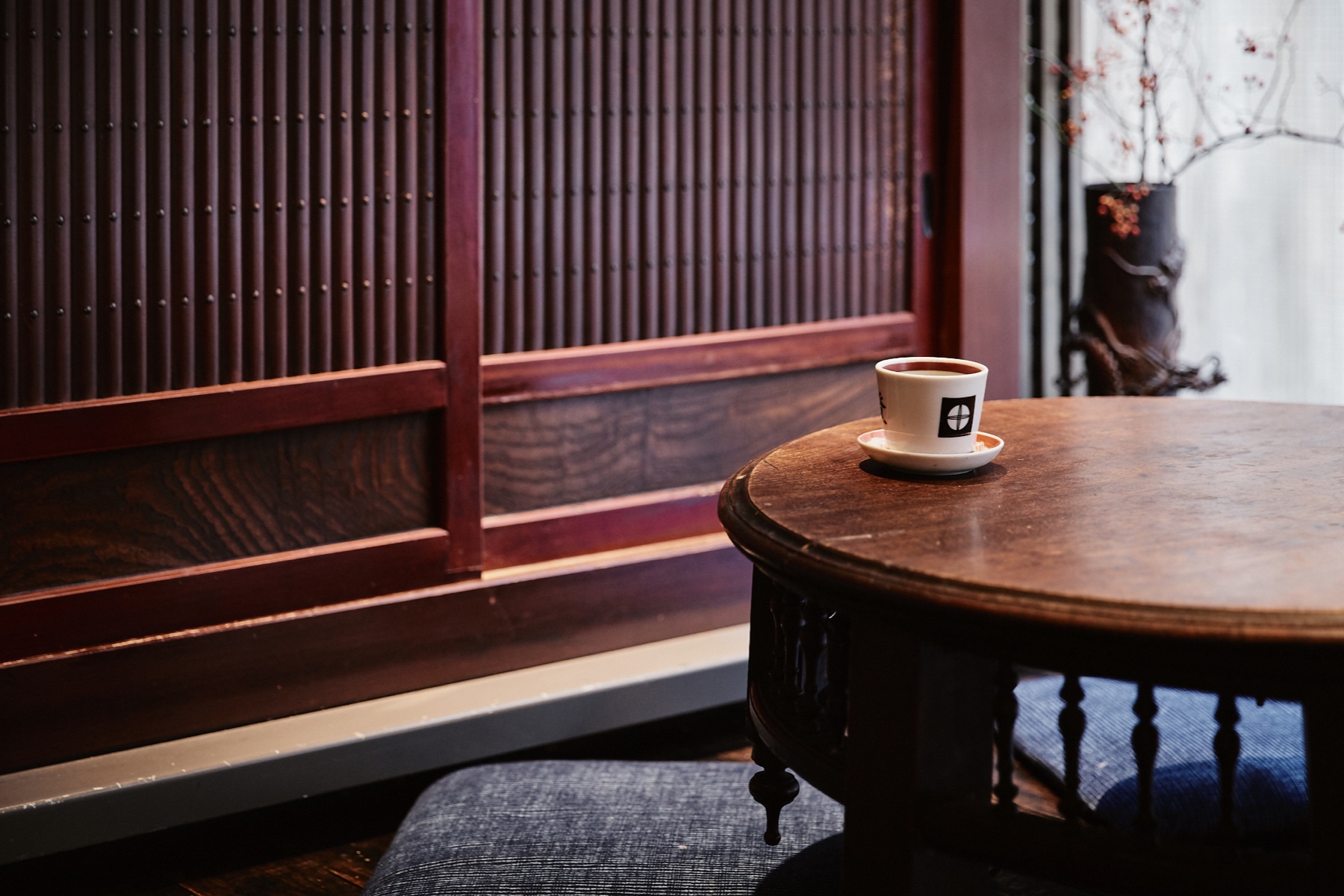 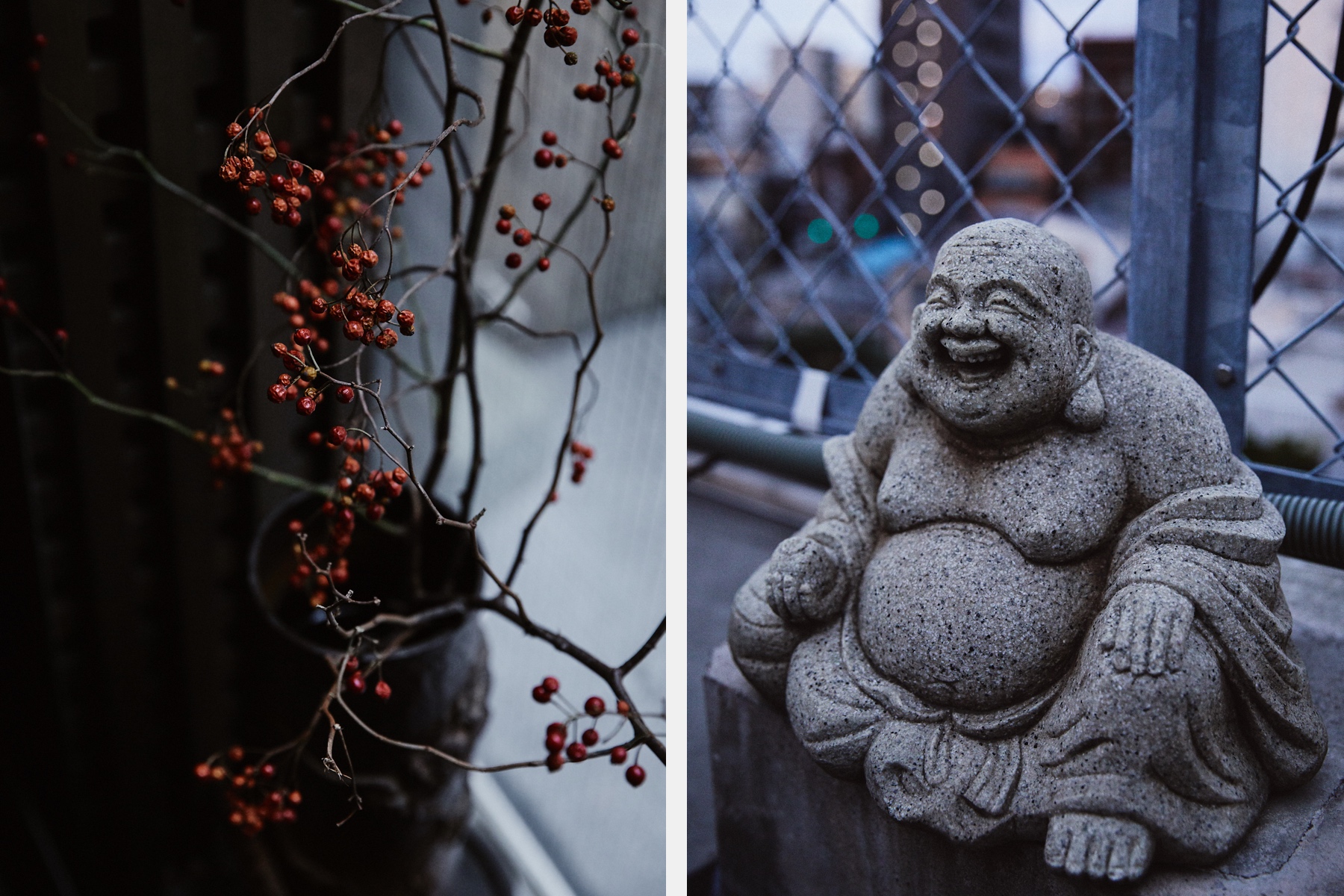 Andon Ryokan is located in Minowa, an area in Taito ward, part of Tokyo’s “shitamachi”. Shitamachi (“under city”) is roughly the eastern part of Tokyo (north of Tokyo Bay and east of Sumida River) and is known to be a more local area, representative of life in Edo (Tokyo’s former name), with many traditional merchants and family owned businesses. I always like going to this area as I feel like I’m experiencing a part of Tokyo where things don’t change as quickly as they do in more ‘glamorous’ parts of the city, like Shibuya and Ginza.

The interesting thing about areas like Minowa is that it’s mostly unknown and off the beaten path to the typical visitor. In areas like these, the best restaurants, bars, etc. are probably not yet listed on sites like TripAdvisor, so it requires a bit of an adventurous spirit or talking with the locals to find the best places. Luckily, Ishii-san was born and raised in shitamachi and knows this part of the city like no other. She’s a great source of information regarding all things local and Japanese culture in general. 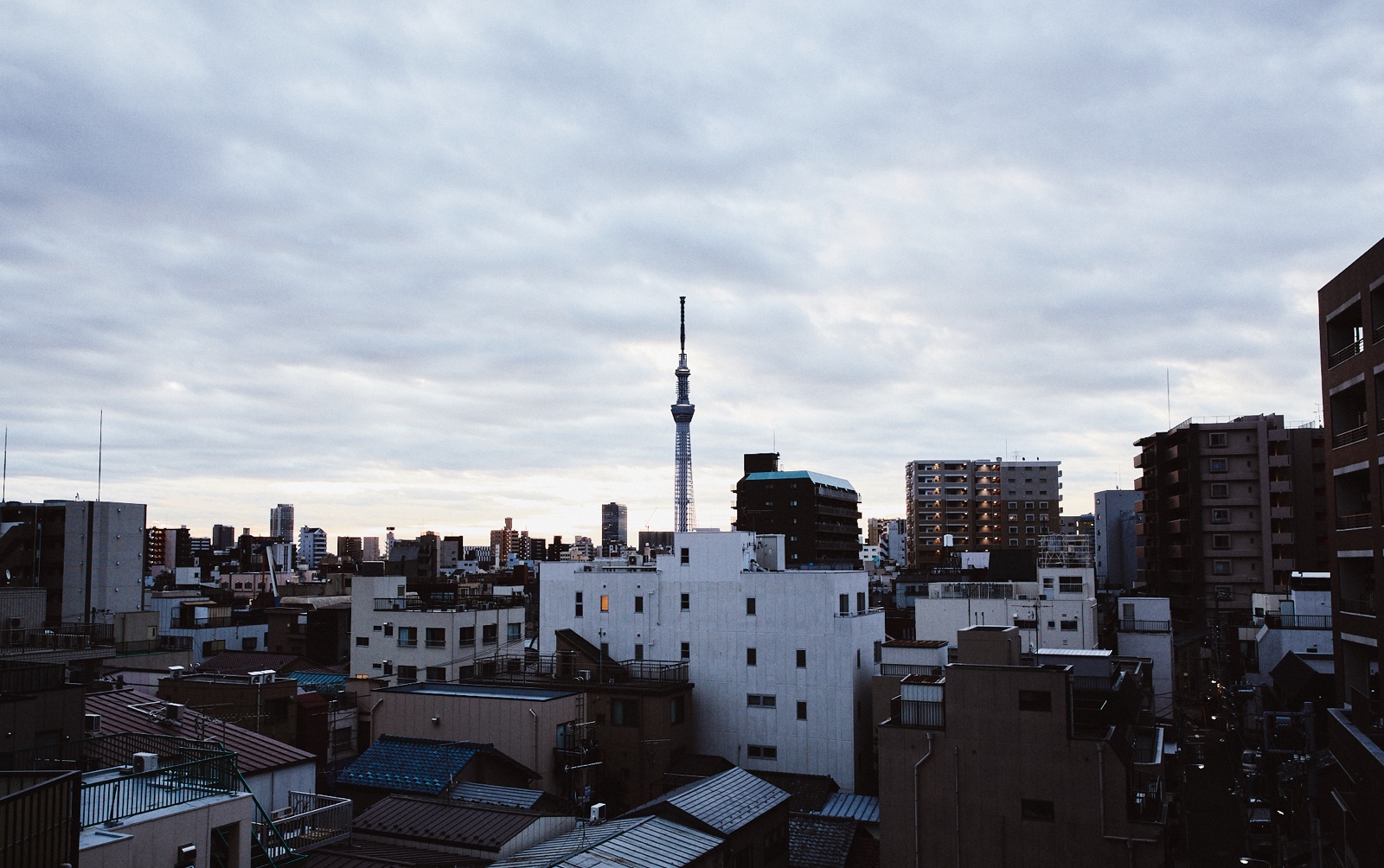 Skytree as seen from the rooftop terrace of Andon Ryokan

Following a local’s recommendation, we end up for dinner at a wonderful little restaurant called “Kou” which specializes in charcoal “yakitori” (grilled chicken skewers). With a little help from the friendly waiter, we decide to order some specialties of the house, resulting in one of the best yakitori experiences of our time in Japan.

After dinner we go to a “sento” (public bathhouse). Of course, Andon Ryokan has shower facilities (it even has a jacuzzi!), but for a truly local Japanese experience, one should at least once visit one of these traditional bathhouses while visiting Japan. Certain rules/customs do apply and sometimes tattoos are not allowed, so be sure to do a quick Google search beforehand. 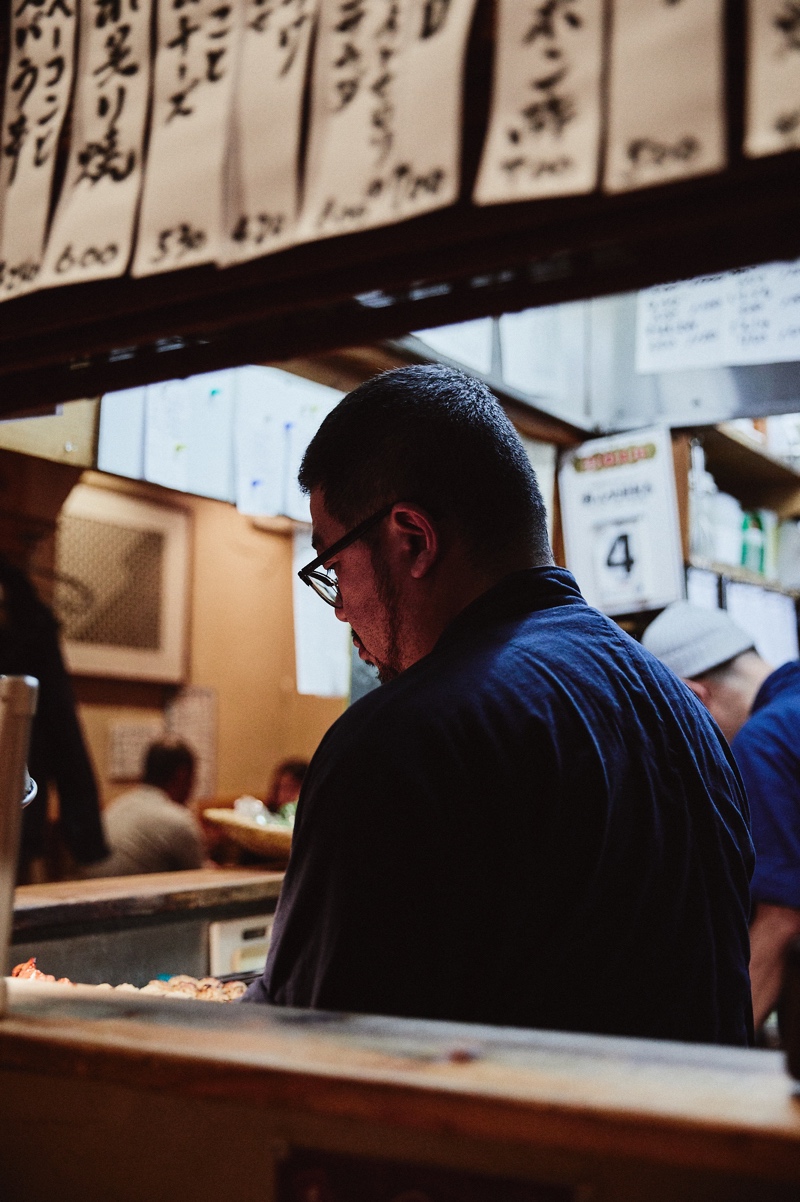 The next morning we head out looking for the old shopping arcade and on the way we stop by Aoki-ya, a very old and famous “katsusando” shop. “Katsu” means cutlet and “sando” is short for sandwich. We pick up a couple of these cutlet sandwiches and eat them in a nearby park while talking about how Tokyo (and Japan as a whole) has changed in recent years and how it will continue to change in years to come. The sad truth is that Japan is struggling with its aging population and declining birthrate. This is an especially big problem in more rural areas in Japan with whole towns slowly becoming abandoned. But this is also visible in the shitamachi part of Tokyo. With a lot of the residents near or past the retirement age, there simply are not enough young people to keep the local economy going, resulting in a lot of closed shops and abandoned houses. This also becomes apparent when we finally find the old shopping gallery. Although it’s still a very interesting place to walk around, one can’t help but wonder how lively and vibrant this place must have been during the heyday of Japan’s economic boom in the late 1980s. 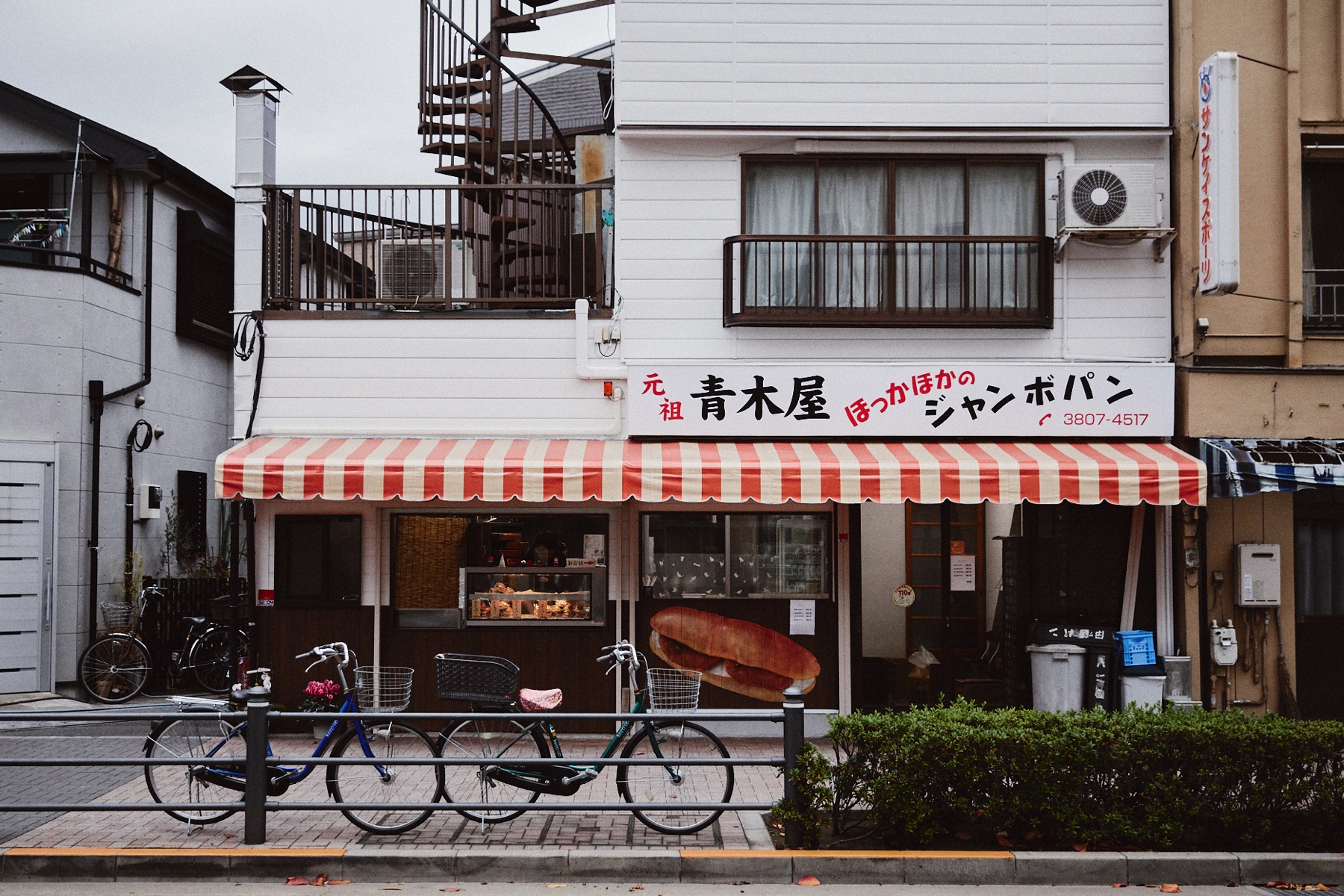 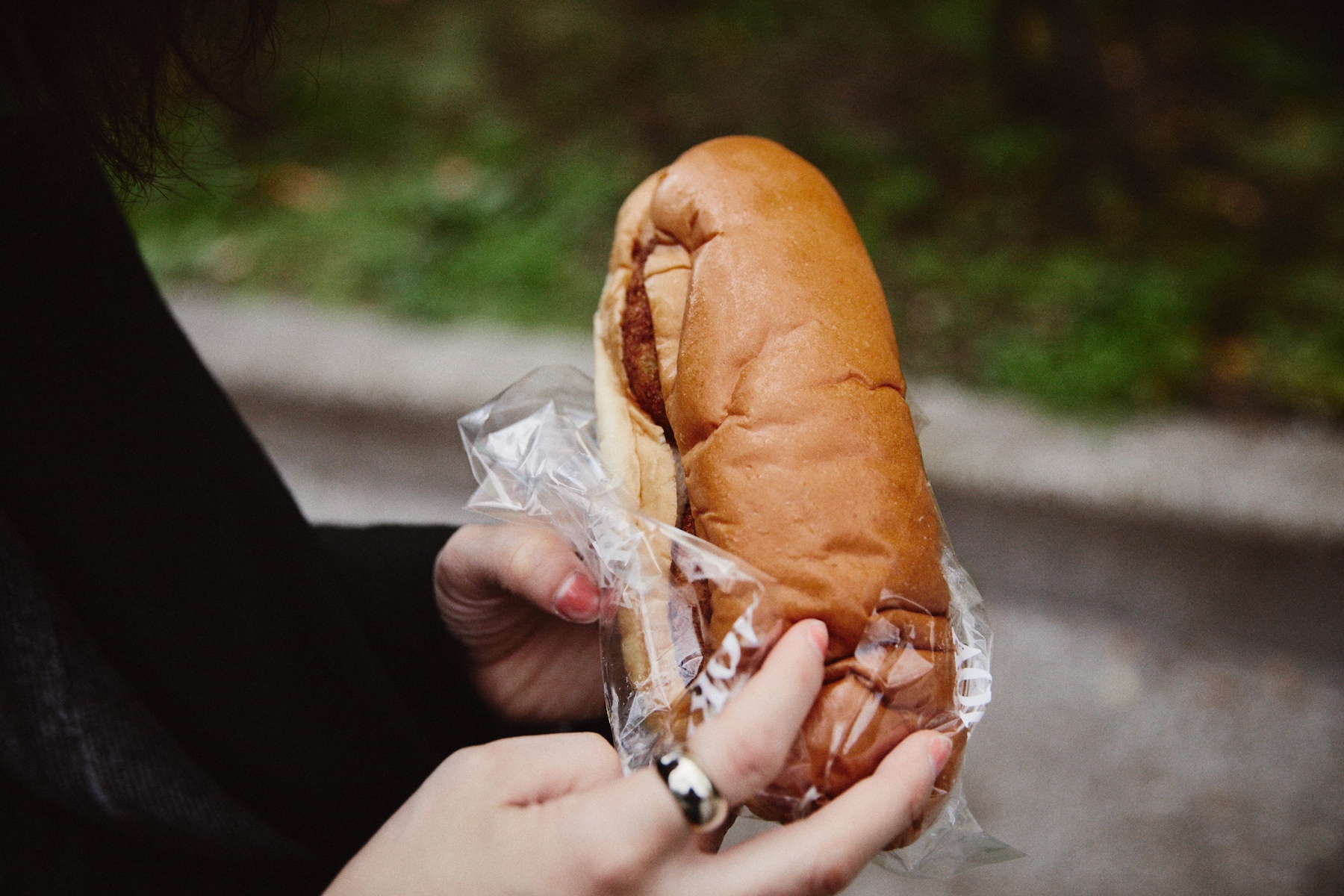 We eat our “katsusando” at a nearby park 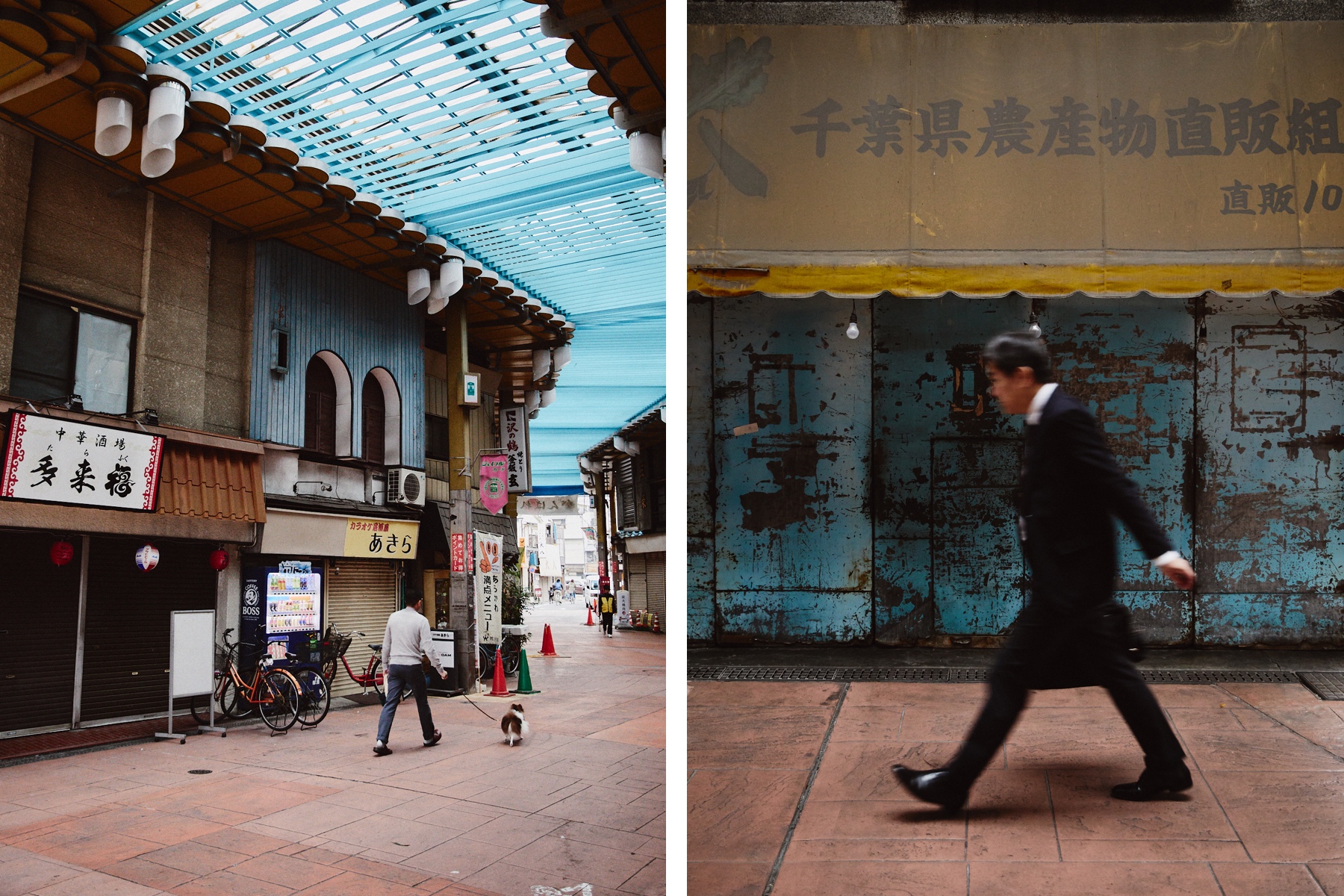 Inside the old shopping arcade 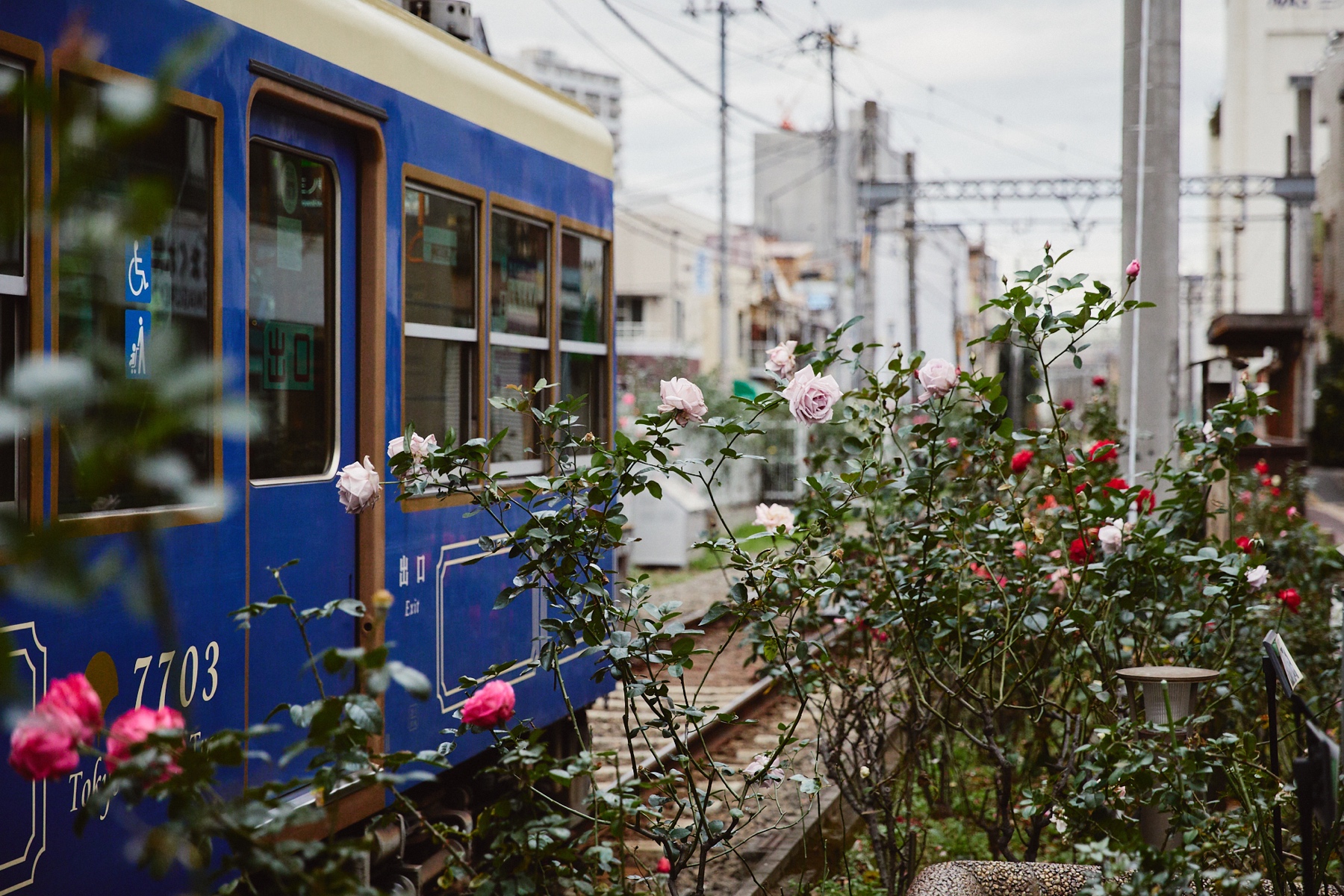 Next morning walk through Minowa
/

People wanting to stay in the middle of the hustle and bustle of Tokyo would probably be better off staying in more central areas, like Shibuya or Shinjuku. However, if one is interested in experiencing the local atmosphere of a lesser-known part of the city, Andon Ryokan in Minowa is a great place to stay. Ishii-san and the other staff members are very happy to share their experiences and knowledge with their guests and in addition to the usual facilities and amenities, Andon Ryokan also offers services like wifi and bike rental, all for a surprisingly affordable price. And let’s not forget about the previously mentioned jacuzzi (can be reserved for private use) and the rooftop terrace which offers an excellent view of the surrounding areas and Skytree.

Born in 1981 in Rotterdam, the Netherlands.
Having worked as a designer in Amsterdam before moving to Japan, Nik van der Giesen is a photographer with a keen eye for capturing beauty in his simple and quiet style. Now dividing his time between Tokyo and Kanazawa, Japanese culture and aesthetics are a constant source of inspiration for his photography.